The main differences between CBD and CBDA from a health perspective

The world of cannabis is immense. As scientists began to explore the plant in detail due to its health benefits, they began to understand this miraculous cannabis world.

Within the simple plant lies hundreds of chemicals that work the magic in our body to help us feel better, both physically and mentally.

When we breakdown the components of cannabis, we end up with about 113 cannabinoids and a range of terpenes. Among the cannabinoids THC, CBD and CBN have been of primary interest to the scientist community.

Cannabinoids come in various forms. The cannabis oils and pastes have an impact on the body because of the interaction with the endocannabinoid system (ECS). The endocannabinoid system remains under preliminary research, but may be involved in regulating physiological and cognitive processes, including fertility, pregnancy, during pre- and postnatal development, appetite, pain-sensation, mood, and memory, and in mediating the pharmacological effects of cannabis.

To understand how these different cannabinoids can influence our health, we need to start from its interaction with our body. We will discuss two cannabinoids in detail –  CBD and CBDa.

What are CBD and CBDa?

Among the various cannabinoids of cannabis are CBD and CBDa. CBD is a short form for cannabidiol, and it takes the credit for the various health benefits one can derive from the cannabis plant.

CBD oils and other products are available on the market for various purposes and use as food supplement, topical or even vaping products. The compound does not have psychoactive effects on the body like THC. Cannabidiolic acid (CBDa), on the other hand, converts to CBD when heated.

The decarboxylation process (when raw hemp containing CBDa is heated), such as during smoking or vaping, helps convert this acid into cannabidiol, which has various health benefits. Thus CBDa is the form available in the raw plant, and it is the acid precursor of CBD.

There is much less research done on CBDa than CBD and until recently it was overlooked by many, who believed that in order to get any health benefits from CBD, CBDa has to be fully converted from its acid raw form.

The beginning compound of both these cannabinoids is actually CBGA.

In the presence of a CBDa synthase (an enzyme with systematic name cannabigerolate found in Cannabis sativa that catalyses the formation of cannabidiolate), it converts into CBDa, which further converts into CBD during decarboxylatio

n. Both these compounds share common properties and health effects as they are derivatives.

Research shows that CBD and CBDa have anti-inflammatory properties

and anti-proliferative properties and many more health benefits to count.

Benefits of CBD vs CBDa

Research on how CBDa or even CBD affect human body is still at early stage and this is not a an article with any medical claim. The common ancestor to the two compounds means that the interaction of them with our endocannabinoid system is almost the same. Neither create a high or ‘stoned’ effect because they do not directly interact with receptors the same receptors that THC does . The only difference is their target receptors.

While CBD is known to interact with adenosine, vanilloid, and serotonin receptors, CBDa mostly works in blocking COX1 and COX2 receptors to reduce inflammation. 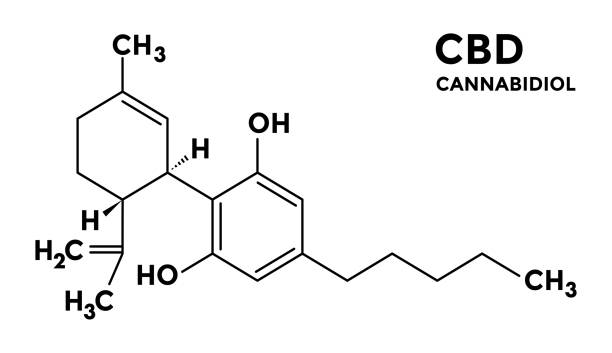 CBD also inhibits CPR55 receptors that help with a lot of health related conditions (we are not claiming any medical facts here but among those associated with these receptors are cancer-fighting properties, balancing blood pressure and bone density, etc). The best strains of Cannabis Sativa, Indica and their hybrids will give you a chance to experience both these cannabinoids.

CBD is among the first few cannabinoids to have progressed rapidly in the medical community. Currently, in the USA FDA approved medication known as Epidiolex is available for the treatment of epileptic seizures, which contains CBD. It stands as solid proof for CBD`s effective anti-seizure properties.

CBD has antipsychotic properties, which makes it the right match to pair with THC dominant compounds to reduce the psychoactive effects. It is among the greatest advantages of full-spectrum CBD oils, where the cannabinoids complement and compensate for disadvantages, if any, and give the best possible health benefits.

CBD has been proven extremely effective for  so many conditions, which we cannot name here for legal reasons but if you are interested to know more, you should click the Source

A large body of research about the usefulness of CBDa, its efficiency for post-chemotherapy treatment is a fascinating area to explore.

While currently, cannabis-based recovery during this stage is under trials, studies indicate that CBDa could have a particularly influential role in coping with side effects of chemotherapy.

There is evidence to show that CBDa can help reduce nausea, vomiting, tumour proliferation, anxiety, as well as inflammation. CBDa could be the road to a healthy recovery for patients with side effects from various harmful therapies.

The various ways to consume CBD and CBDa

The type of consumption determines bio-availability or delivery such as  THC delivery using smoking or vaping. The various forms of CBD products known to us are oils, vaping juices, tinctures, creams, lotions, capsules that are available on the market today.

CBD infused juices, water, gummies and other such edibles are also available at many pharmacies and healthshops . In terms of CBDa, the options are quite limited. The reason is that CBDa is present only when the plant extracts are in its raw form, or it gets converted to CBD.

Which one to prefer?

CBD has been the centre of medical research for almost a decade now. Hence the level of research climbing up to clinical trials is higher in this case.

Whereas CBDa is still a new compound of interest in this sector. Thus most of the available work is still restricted to the preclinical stage of animal trials.

As with most research into the cannabis plant, there are no human trials at present examining the effects of CBDA. There have been several interesting studies however, at a pre-clinical level, meaning they were carried out on cell cultures or animal models. Unitl this research happens in humans, no real conclusions about CBDa’s benefits to our health can be reached.

What is known is that cannabis research giant GW Pharmaceuticals, currently hold a patent for CBDa as a potential epilepsy drug. As world leader in cannabis treatment of epilepsy, they have discovered that CBDa has better bio-availability than CBD, allowing for a more rapid onset and quicker results. They also noted that less CBDa is required compared to CBD to achieve a therapeutic effect.

Some claim that CBD is a superior compound to CBDa as it offers comparatively wider range of health benefits. But unless the level of research matches, there isn’t a right or wrong side in this debate.

In terms of consumption, the fact that people would prefer an alternative form of supplementing CBD to smoke or consumables suggests that CBDa could have a broad scope for medicinal use.

CBDa is a rather pure form of the cannabidiol which eliminates problems of smoke, toxic residue and delivers the best possible health benefits.

But studies indicate that CBD is absorbed faster into the system as compared to CBDa. Hence scientists are looking for combining the two compounds or preparing medications to ensure you derive the best value from both.

Together they create miracles

While we wish to understand the difference between the cannabinoids genuinely, it is essential to know that the beauty of cannabis lies in giving a united front of cannabinoids for health benefits.

Today, scientists understand the reason why full-spectrum oils are more potent than isolated varieties. The complementary properties of the cannabinoids help elevate the best in each of them and suppress the negatives.

It makes cannabis as a whole an incredible compound to enjoy various health benefits. A full cannabinoid and terpene profile could be the right choice for seeking relief from various physical and mental ailments.

If you are interested to try our CBDA products, click here:
CBDA Vs CBD2020-01-122020-01-12https://www.holistichempscotland.com/wp-content/uploads/2017/06/holistic_hemp_logo_v3.pngHolistic Hemp Scotlandhttps://www.holistichempscotland.com/wp-content/uploads/2019/12/industrial-hemp-field.png200px200px
Recent Posts

The statements and references to our products found throughout our site have not been evaluated by the FSA (Food Standards Agency). Do not take if pregnant or lactating. Keep out of reach of children. Our products should not be used as a substitute for a varied diet and healthy balanced lifestyle. We do not sell or distribute, any products that are in violations of the United Kingdom Misuse of Drugs Act 1971. It is the responsibility of the customer to ensure that they are in compliance with local legislation.